The LoadView Plugin for Jenkins

Before we dive into the specifics of the LoadView Plugin for Jenkins, we’ll discuss Jenkins and why is it important.

As part of modern software delivery practices, such as shift left testing and continuous integration, developers, testers, and designers all utilize Jenkins to build, deploy, and automate their tests.  Over time, as development and testing cycles became shorter and more frequent due to technological advances and the focus on the digital experience, it became apparent that in order to release quality software features – and consistently – teams as a whole needed to become more agile. This meant that testing now “shifted” to the left and happened earlier, typically after the initial code is written. This “test early and often” mantra is especially significant in continuous integration and continuous delivery (CI/CD), where the goal is to be able to consistently and continually release changes.

Continuous integration essentially ditches the need to test from one’s own machine and automatically test every time new code is pushed into shared source repository, which could be multiple time per day. The advantage of continuous integration is that all development work and code can be integrated into the process earlier, helping to identify and fix bugs or errors more quickly and effectively. The quicker you can find and fix software errors, the more likely you won’t have to fix it in production, where it can be more time consuming and expensive.

To extend continuous integration further, teams use continuous delivery practices to automate and control the software release cycles on top of automating the software testing process. Furthermore, teams can employ continuous deployment, which essentially removes the need for almost any human involvement. All changes that pass through your software development stages are automatically released into production.

Continuous integration (CI) and continuous delivery (CD) epitomize a culture, set of operating principles, and collection of practices that allow application development teams to deliver code changes more frequently and reliably. This is known as CI/CD pipeline.  CI/CD is one of the best practices for DevOps teams to adopt. It is also an agile methodology best practice, as it allows software development teams to focus on meeting business prerequisites, code quality, and security as deployment steps are automated.

The Difference Between CI and CD

It’s unclear how this conflation of the two terms started. Be that as it may, it’s sufficiently simple to clear up.

Continuous delivery, on the other hand, essentially sets out to automate the entire software testing cycle and trying to remove as much manual work as possible, which allows developers the time to work on other projects and not have to manage all the individual steps.

CI/CD is many strategies that empower application designers to convey code changes all the more much of the time to clients using computerization.

The abbreviation CI/CD alludes to two separate ideas that are commonly utilized together: ceaseless mix and consistent conveyance.  Ceaseless coordination alludes to a mechanization procedure that engineers use to fabricate, test, and combine application code changes.  Persistent conveyance is the subsequent stage in which the tried code from the ceaseless mix is naturally sent in different situations by a manual trigger.  Continuous delivery can likewise represent the ceaseless arrangement, which presents further computerization. In nonstop conveyance, engineers need to push changes to their creation condition physically. By utilizing nonstop organization rather, designers can have application changes consequently sent to any condition. For this conversation, we will just concentrate on the ideas of ceaseless mix and consistent conveyance.

The cutting edge, relentless universe of user improvement requests that various engineers take a shot during a single application happen all the time. When designers are prepared to test their changes in a standard life cycle, they consolidate their code changes on a preordained “combine day.” The blending procedure can be tedious and time-consuming. It turns out to be much more complex if a designer’s change influences another engineer’s change, at last driving the group to rollback or go through hours on bug fixes.

Changing over to a CI/CD process helps designers combine and test code all the more as often as possible, even every day.  The nonstop joining stage follows these fundamental steps:

When intensive testing has completed, groups can proceed onward to the non-stop conveyance stage. An engineer must physically activate the conveyance of code. However, the remainder of the procedure is completely programmed. All fundamental communication with web workers, databases, and different administrations is finished with the call of content.

CI/CD at the Edge

CI/CD programming pipelines are especially useful while sending in high-chance conditions. At the edge, there is an absence of physical access that can some of the time make it hard to moderate issues. Utilizing consistent incorporation and ceaseless conveyance diminishes the hazard by supporting little, gradual changes to an application. Issues would then be able to be quickly recognized and alleviated before harming creation conditions.

Jenkins is an open-source automation tool where the focal form and persistent coordination process happens. The program is a Java-based self-containing program with bundles for Windows and MacOS.

CircleCI is a CI/CD device that bolsters the fast turn of events and the arrival of the product. CircleCI empowers mechanization over the client’s pipeline, from code building to testing and sending.

TeamCity is a Java-based build management and CI server from JetBrain. TeamCity supports building and deploying different types of projects. It can be installed on Windows and Linux servers and supports technologies like .NET. Additionally, the tool can be integrate with other tools, like Docker, Jira, Maven, and Azure, Amazon EC2, and Google Cloud.

LoadView: Real Browser-based Load and Stress Testing from the Cloud

The LoadView platform is a flexible load and stress testing platform that addresses the issue of ineffective load patterns, simulating everything from protocol-based tests to real browser-based tests.

Performance testing usually requires additional infrastructure and resources that some organizations may not be able to support. LoadView manages this for you through the platform. The platform is completely cloud-based, so there’s no need to setup or deploy any internal load injectors, manage third-party cloud accounts, or worry about hardware or software requirements. 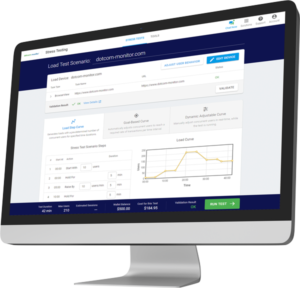 These features put the process of performance testing into users’ hands, setting LoadView apart from other load testing solutions on the market today, like Gatling or JMeter. Open-source tools like Gatling and JMeter just don’t have the same features and functionalities compared to the LoadView platform.  Read more about all the features of LoadView.

We touched on Jenkins earlier in this article, but just to reiterate, Jenkins is an open-source automation platform, written in Java, with modules designed for continuous integration purposes. Jenkins is designed for building and testing your product development, always making it more straightforward for engineers to incorporate changes to the project.  Likewise, it permits you to ceaselessly convey your product by coordinating with countless testing and organizational innovations.

With Jenkins, associations can quicken the product advancement process through an automation console. Jenkins coordinates improvement life cycle procedures of different types, including manufacture, report, test, bundle, stage, send, static examination, and considerably more.  Modules permit the mix of various DevOps stages. If you need to coordinate a specific device, you have to introduce the modules for that instrument.

When Jenkins is Used

The Jenkins console can be used in many different ways, but it is very supportive in Agile because Dev and QA are working side by side. For example, whenever a developer pushes a new code on a version control system, such asGit, Bitbucket, etc., then a job will be triggered to deploy the build within the QA environment.  After the successful deployment, automated test suites will trigger and the resulting reports will be sent by Jenkins.  Jenkins is very flexible and provides many plugins to help support third-party integrations, and it is also very simple to setup/configure.

Why Jenkins is Used

Another major part of Jenkins tool is the Jenkins Pipeline. The Jenkins Pipeline displays an overview about the different jobs running on builds after commits made by developers. It notifies about the tasks Jenkins is currently executing.  In the build pipeline, the build can be seen as divided into sections, such as the unit tests, acceptance tests, and packaging, reporting, and deployment, phases. These phases can be performed either in a series, or parallel. If one phase is successful, it automatically proceeds on to the next phase, thus referring to its name ‘Pipeline.’

As several various changes are being committed by different developers at once, it is helpful to know which change is getting tested now, or which change is sitting in line, perhaps due to a failed build. Once the build has passed unit and integration testing, then engineers in test automation services use Jenkins to trigger automation suites and email reports once the job is ended.

The Jenkins console gives us various interfaces and tools to work with in order to automate the whole process. Jenkins is used to build and test your software projects continually making it easier for developers to integrate changes to the project, and making it effortless for users to obtain a fresh build. It also authorizes you to continuously deliver your software by integrating with a large number of testing and deployment technologies.

Utilizing the LoadView Plugin for Jenkins, performance testing teams can easily incorporate real browser-based load testing into their Jenkins test builds. This ensures that applications are continuously being tested and evaluated over longer periods of time. This allows teams to identity and address errors and bottlenecks before code and applications are pushed into production.

The primary objective of load testing is rather obvious, to define how much workload the system can take before breaking down or stalling, but the process can be much more complex that just that.  A solution like LoadView simplifies what used to be a time consuming process.  Exposing a system to large amount of load, or virtual users, allows you to reveal weak points of the system with detailed specifics regarding the source of the problem before additional damage is done.  Aside from helping to locate issues, load testing also provides performance results through waterfall charts, test results, and benchmarks from comparative tests. It makes it clear when and why the problem occurred and what caused it to happen.

*Before using the LoadView Plugin for Jenkins, you must first have an active Jenkins and LoadView account and configure a stress test scenario.

No credit card, no contract.

To set up an integration with Jenkins, you will first need to create a Unique Identifier (UID) to use as a LoadView Security Token. To create your UID, follow these simple steps: 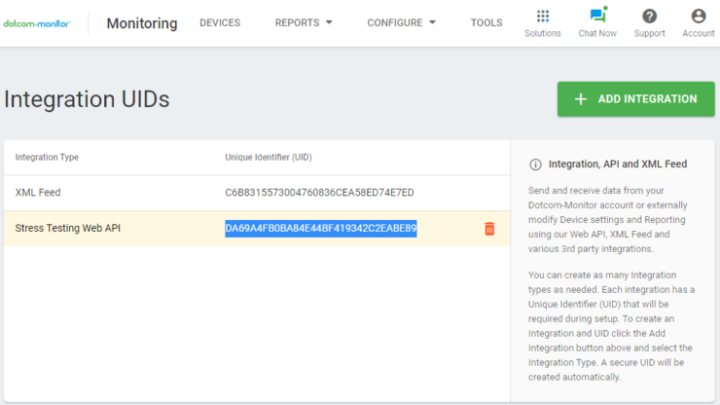 5. Copy the integration UID to use in Jenkins. 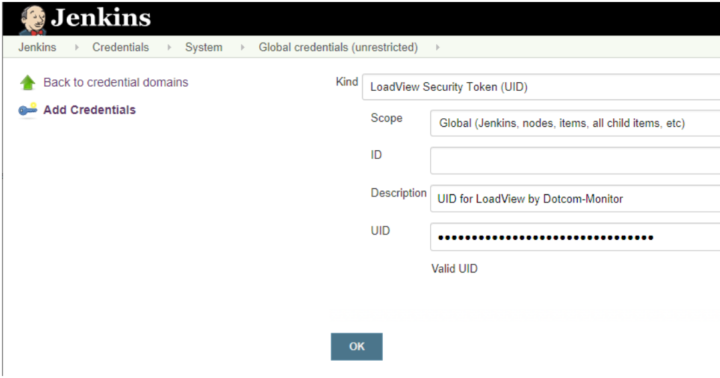 2.  Configure and validate the credentials 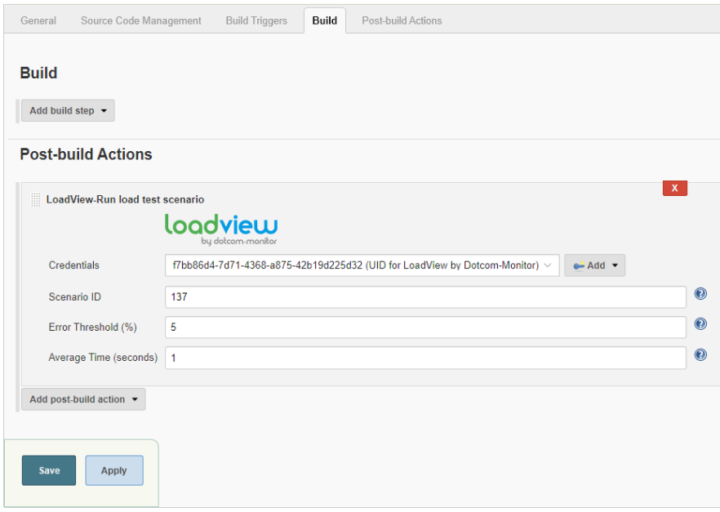 4.  Save your Build Actions

When a test is running, the status of execution is displayed in the Jenkins Console Output in real-time mode.

Once the test has been finished, the results can be found under LoadView Results in the Jenkins Build menu.

All from one convenient load testing platform.