Before we explain how to determine the application breaking point within the LoadView platform, we must first describe the differences between a load testing and a stress test. While the terms are often used interchangeably, these tests seek to find different results.

A load test is a type of non-functional testing used to validate the health of a system while under a specific level of simultaneous requests, also known as load. The goal of a load test is to prove that a system can handle an expected, or acceptable level of volume with minimal disruption or degradation. Factors that are used to create this performance baseline are connection speed, latency, and download times, among others. Generally, load testing is carried out to help predict application performance within realistic boundaries, helping to understand how performance is impacted during peak load events. Pushing the system beyond these thresholds may inadvertently cause your load test to become a stress test.

On the other hand, a stress test is designed to push a system past the point of degradation, sometimes to the point of a complete failure. Pushing a system past the point of degradation or failure allows engineers to see how the system handles recovering from this failure and whether or not changes in hardware capacity are necessary. Some of the factors that are typically monitored during a stress test are disk I/O, bandwidth, CPU usage, memory, and various database performance metrics.

Determining the breaking point of an application isn’t typically straightforward as it seems. Obviously, if the server crashes, you’ve definitely found that point, but there are other factors to consider, such as response times. These days, if a web page or application doesn’t respond within just a few seconds, users are going to bounce. Long response times can be an indication that your application is down. Another indication something is broken is that you begin receiving comments from users about web page issues or your support or IT team is notified through trouble tickets.

Below are the results of a basic HTTP stress test, utilizing a load step curve, with a beginning load of 12 users per minute. 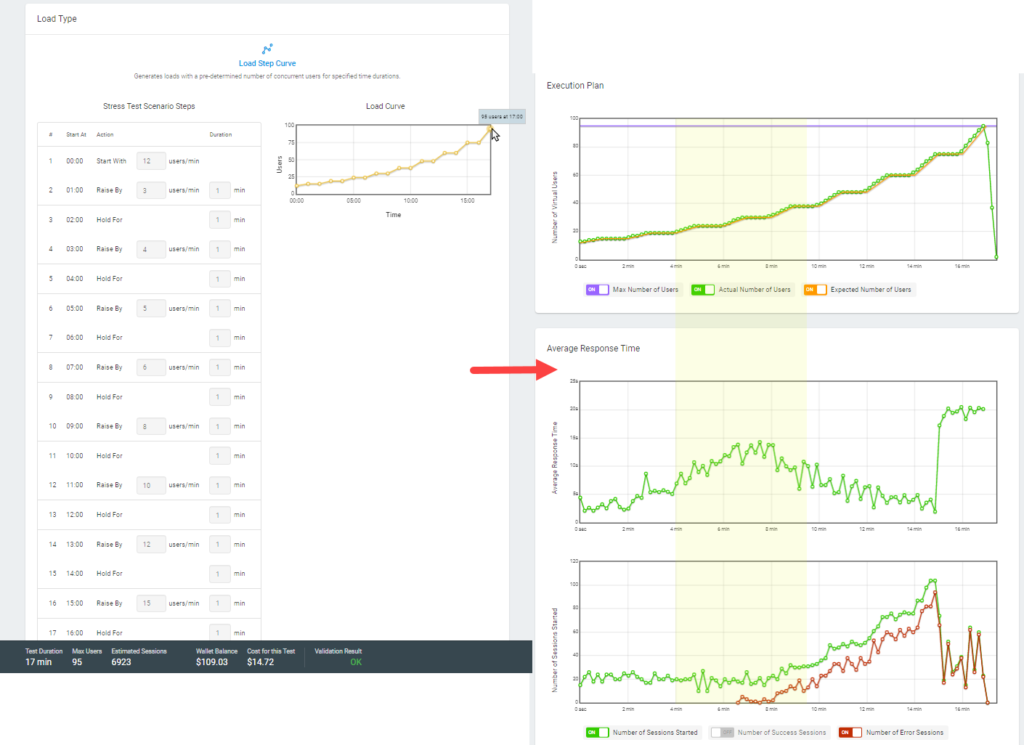 For more information about executing stress tests within the LoadView platform, please visit our Knowledge Base.