The Importance of Ramp Up and Ramp Down User Load

Performance testing has always been one of the steps taken before an application or site is ready for the general public. A stable and smooth application is the foundational milestone and a must-have for a great consumer experience. But as the business expands and traffic on the application increases, we tend to see degradation of user experience with multiple errors, slow page and application load times, and worst of all, complete crashes. To make sure your web page or application behaves well during high traffic times, we need an extensive load testing solution that can simulate real-world scenarios so we can better understand performance bottlenecks and make appropriate improvements.

Before we even start writing load test scripts, an analysis of user pattern and application usage is a critical step in the load testing planning process. This helps us to understand where the normal and peak traffic times exists, which eventually help when it comes time to configure the appropriate ramp up speed and duration of concurrent users during the load test. A load test carried out with keen understanding of these patterns can help get more accurate results, which later helps in accurate optimizations when reviewing test results.

What is Ramp Up and Ramp Down?

Similarly, ramp down during load test means during the end of peak hours, we tend to see a drop in concurrent users, ramp down would be the speed in drop of users on time series plot. We should use the same strategy to load test our applications for best results.

What is a Flat Line Load Test?

Benefits of Ramp Up and Ramp Down

In our application, as we see more distributed concurrent users at different times of day, we can generate similar load test scenarios and check at what stage our infrastructure starts misbehaving. This will help us to find the application’s breaking point and will help us understand application scalability beforehand.

We can use the load curve test strategy which helps us to increase concurrent user count gradually and increase the users after every specified time duration. This strategy can help us understand infrastructure behavior and bottlenecks during the peak of the load curve and share key insights, like which specific component in overall architecture is more prone to break. Finding the bottleneck with the load test curve can also show us if we see any cascading effects on other parts of the architecture. This will be the key findings which can help optimize our overall application system and can save us from production downtime and customer experience.

Once we have achieved the expected load test concurrent users and our system runs smooth at desired load, we should be considering continuing with constant load tests with those concurrent users. Testing with constant load after achieving load curve peak can help us find any issues or optimizations related to application parallel threads synchronization, new threads spawn, which results in overall response time of application. There might be a case when an application thread kills, delaying the start of a new task. A constant load test can help find those issues with ease.

As we have seen how important it is to carry out load tests with proper load test strategy, there are multiple tools in the market which support easy ramp up and ramp down control, as well as defining test duration. Let us dive into how LoadView provides users with an easy test configuration and setup process so that we receive the best results out of the test run.

Ramp Up and Ramp Down Strategies

Loadview, the browser-based load testing solution supports load testing of web applications, web pages, APIs, and streaming media. The solution provides an easy way to configure load tests based on the requirements of your test. Once we have the application under test ready, we can create a test scenario and run our load test with multiple strategies. LoadView provides options to run a variety if load test curves, however when dealing with specific numbers of concurrent users and slowing increasing numbers over a specified time with specific ramp up and ramp down periods, the Load Step Curve is the option best suited for this scenario.

We can enter starting concurrent users to initiate, and then ramp up users by using the Raise By action, which increases the number of users each minute for a pre-defined time interval. Alternatively, users can select the Lower By action, which decreases the number of users every minute. Similarly, to achieve a constant load, LoadView provides an option, called the Hold For action, to keep the test running with a specific amount of desired concurrent users.

Once you’ve configured the steps, the next part is setting up the payload and geo-regions to run the test. 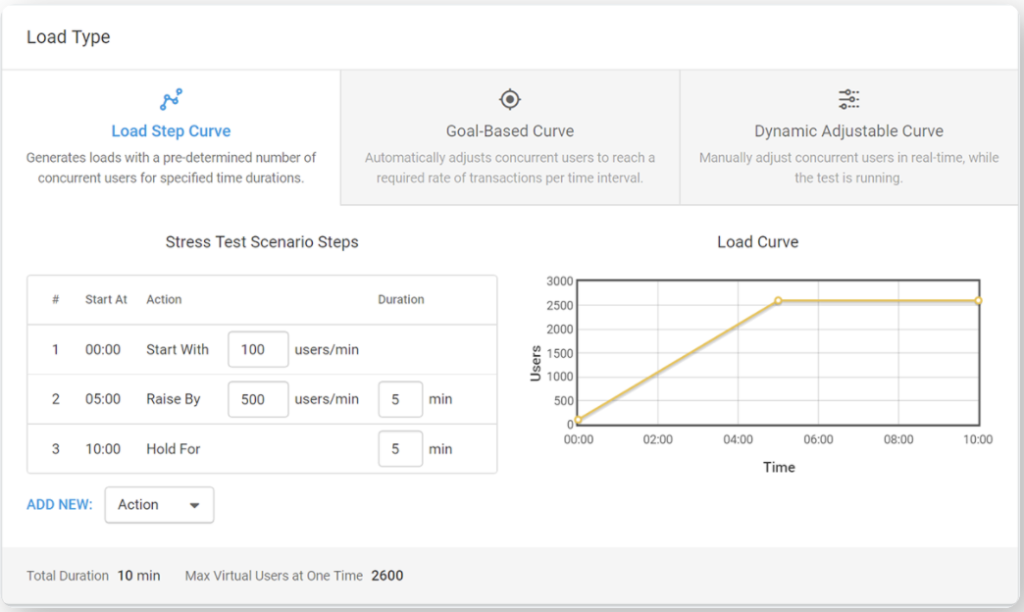 As you can see in the image above, there are two other load curve options LoadView users can select from. They are the Goal-based Curve and Dynamic Adjustable Curve. Each has its specific functionality and purpose. Learn more about these load curve types and when to use them. Read the Choosing the Right Type of Load Curve Knowledge Base article.

Conclusion: The Importance of Ramp Up and Ramp Down User Load

Designing a strategy and following the real usage pattern of an application can help us find the right issues at the right time using tools like LoadView. This overall analysis and load test can have multi-fold benefits for our application and business. We understood today one of the most used ramp up and ramp down strategies and its benefits over the course of this article. We also understood, with browser-based interaction on LoadView test scenario, and how we can achieve and benchmark our application to grow immensely. Try LoadView for yourself today.