Load testing is a process used to determine the behavior of a system under normal conditions, as well as peak load conditions, to ensure smooth and consistent performance.  Load testing is used to give confidence and reliability to the system. It helps to identify traffic jams in the system and gives insight into what elements may be not be performing adequately, ensuring that when applications and services put into production there are no surprises.  Load testing is used to maximize the operating capacity of applications and it also find outs the elements that cause degradation in bottlenecks or traffic jam. It is used to detect network delay, issues in software configuration, and database components. It improves the scalability and customer satisfaction. In this article, we’ll set our to explain the differences between web UI and back-end testing.

Load testing a user interface requires a platform that is adjustable, customizable, and also flexible. UI testing involves testing everything that is visible to your users, or the client side. This can be anything from forms, menus, portals, shopping carts, etc.  The ability to create load tests that more accurately depict user scenarios within your UI allows you to better understand what the user will experience. By analyzing the system where critical issues occur you can make performance adjustments and can create a proper way to check issues you need to solve in increasing performance.  For this article, we’ll be taking a look at LoadView and how users can setup various load test types to test their UI.

LoadView allows you to set up your load tests by using three different curves: Load Step, Goal-based, and Dynamic Adjustable curves. We’ll take a look at them here.

The Load Step Curve show traffic in the set of numbers to chase task on time. It is based on visitors and their rates (arrival/departure) in the load curve. If any changes in representation the chart shows visual. To handle the load follow different steps for verification. 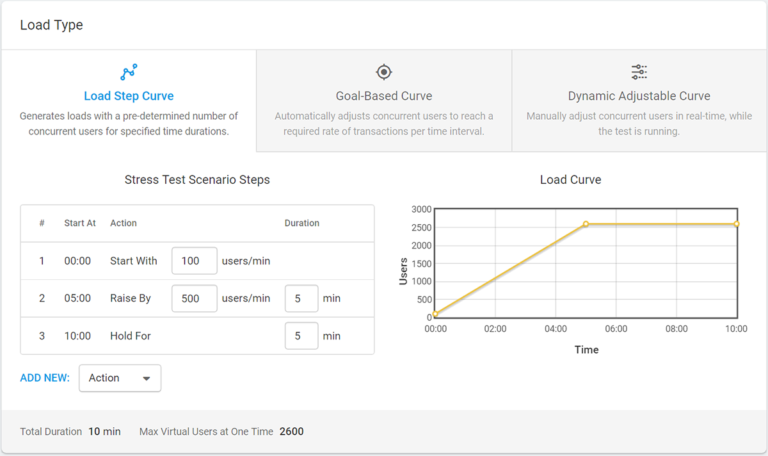 The Goal Based Curve shows your website expectation of traffic, it’s planning, and also production culture. It also works on transaction goal and device response on time this setup put up with a start with many users in load testing.

Lastly, the Dynamic Adjustable Curve shows barriers of your website structure, how websites and applications change on a different level of increasing and decreasing of a load.

An additional feature of the LoadView solution is Geo-Distributed and flexible On-Demand load testing, allowing you to create real-world tests that from where your users are located.  Manipulate how web services, network, and frameworks work under load issues. Test and improve the performance of site, applications and services. Check the limits of performance to ensure customer satisfaction. 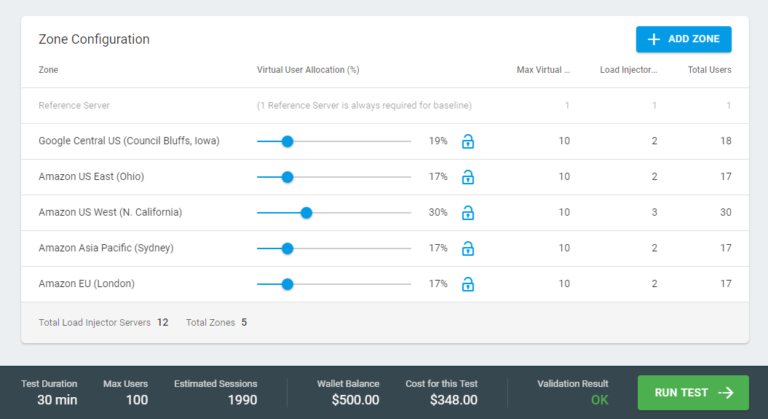 What is Back-end Testing?

Back-end testing is testing that checks the application and database layer of a 3 tier architecture (Presentation layer, Logic layer, and Data Access layer).  In a complex software computer program, like an ERP (Enterprise Resource Planning) system for example, back-end testing would involve checking the business logic in the application layer.  For simpler computer programs, back-end testing checks the server-side, or more specifically, the data that is  entered in the front-end will be checked in the back-end.

The back-end database is examined for better performance and its privacy, and no need of looking at the user interface.  From the back-end the data is entered directly from the browser permanently. This requires different languages, like XML or JSON. From the back-end the data is directly entered and verified with the help of SQL.  Back-end database testing is very authentic, and also some important tools which solve issues with the help of this.  Through this testing, we can also check the shortage and data loss/corruption and bad performance of web services.

In back-end testing the server and database are checked. The data entered in the front end will be stored in the back-end database. The database may be SQL server, MySQL, oracle, DB2, etc

Here is a chart that explains the major differences between UI and back-end load testing.

The LoadView platform can execute performance tests on your websites, applications, APIs, databases, servers, and more.  Sign up for the free trial and get $20 in load testing credits to start!